With a full day to spare at Dandeli, a ride to Castle Rock sounded exciting. Unfortunately, crossing the border to visit Dudhsagar is arduous due to restrictions (unavoidable RTPCR test).  Castle Rock is a small village surrounded by dense forests bordering Goa. These woodlands fall under Dandeli Wildlife Sanctuary, also called Dandeli-Anshi Tiger Reserve. This region is famed for bird-life besides Wildlife. It was a delight to stroll around the empty Castle Rock Railway Station. A small shop nearby serves piping hot local cuisine. 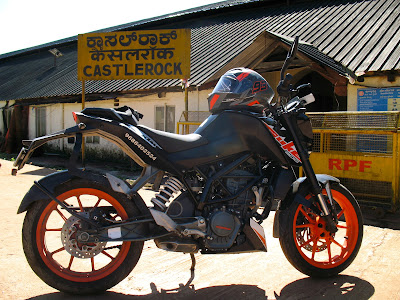 It was thrilling to traverse through narrow and winding roads to reach Ramnagar, a chief town on the Panjim-Belagavi highway. It serves as a good pit stop to fuel up for the ride ahead, through the forest with scant sunlight. A deviation takes you towards the famous Old Magazine House - a hotspot for feathered friends. The road in the ghat section is under construction at many places. The ride is at snail speed though the scenery compensates for the bad roads. It was gratifying to ride until the border on the Karnataka side, as we were on the other side during our Goa ride. 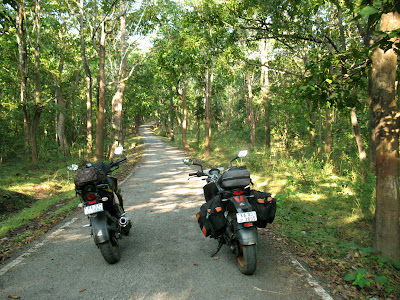 Spread over a vast area of 1300 square kilometres, Anshi National Park – recently renamed as Kali Tiger Reserve (KTR), was on top of the bucket list of riding routes. The SH34, Ramnagar-Karwar road connects Karwar to Dandeli via Joida. This is the usual route taken, but a detour from Sangave the interior roads with twists and turns take you to Ulavi via Syntheri Rocks. A little ahead of Ulavi, this road connects to SH146 and finally at Anshi joins SH34. The jungle of KTR has a very distinct vibe compared to the adjoining national parks of Bhagwan Mahaveer Wildlife Sanctuary and Cotigao Wildlife Sanctuary in Goa. Some routes are through dense forest with narrow meandering roads, with a stream on one side. Several minor roads lead to interior villages, with many options to explore the area. 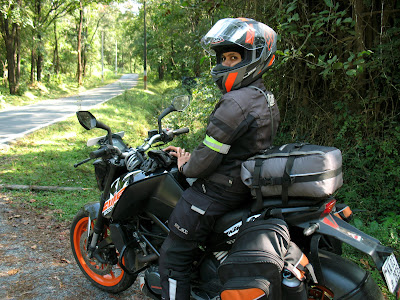 The most popular attractions are Syntheri rocks and the pilgrimage site of Ulavi. From Ulavi, there are other stunning places to visit. To name a few: Shivapura Hanging Bridge, a Panchalinga cave and a viewpoint. There are 4WD jeeps, which will take you around these places for Rs.1000/- per jeep. Locals say the off-road is doable on a motorcycle, so you can give it a try if you are itching to ride your ADV motorcycle on these 4WD routes. It is said that crossing the Shivapura Hanging Bridge to reach Yellapura cuts the distance by more than half, though only two-wheelers are allowed to cross. There are many resorts and homestays around the national park area. Stay in one of them and explore the national park and the hinterland.
By tatkalticket at December 06, 2021