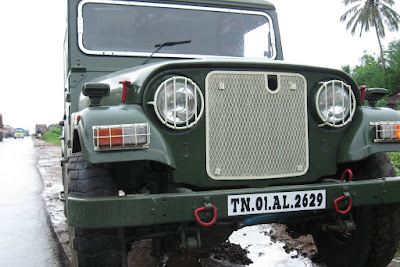 This road trip was done in July 2010 while I was working with HDFC Bank at Cherthala -my hometown. I took two days leave, after visiting Deepak at Palarivattom,  boarded a KSRTC bus to Coimbatore from Cochin to attend a friend's wedding reception. I spotted this Mahindra 4WD 550 jeep custom built for Indian Army and Rexy, a friend from college days who used to participate in bike races in and around Kerala with this Suzuki Shogun and Yamaha RX135. I couldn't help jumping off from the KSRTC bus at the next speed breaker and join Rexy to Chennai. My plan was to get down at Coimbatore but I fell in love with this 4WD which was auctioned later to scrap dealers at Chennai and decided to go along with Rexy to pick another jeep from Chennai. On the way to Coimbatore we had to stop at a workshop to change the canvas inside the wheel cup since the front wheels were wobling too much. Well prepared for this, Rexy had all the tools and spares for any kind of breakdown, including two spare wheels, foot pump, two hydraulic jacks, bearings, belts etc...a mini workshop and spare parts shop for a jeep. 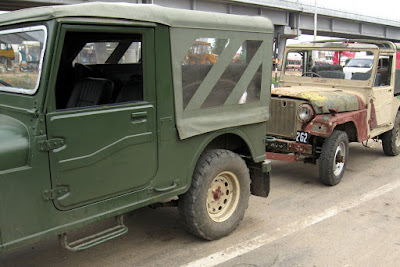 We reached Coimbatore at 10pm and met my friend and wife, they were relatively free as there were not many relatives left out and I could chat with him for 15min though I missed out on the vegetarian dishes and good looking Tambhram girls. After a while we continued our journey to Chennai. After another 100km, both Rexy and Nasar were tired and they slept for a while parking on the roadside near a toll plaza. I rang up Nithin and briefed him about my whereabouts, I took shelter under a truck while there was a light shower. We reached Chennai next day morning 10am and went straight to the scrap dealer's yard. 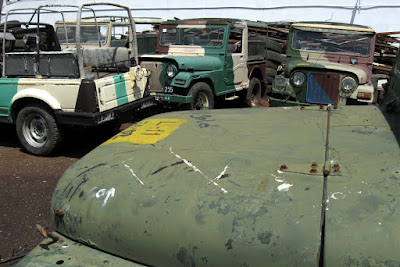 Numerous vehicles from Army at this yard amused me. Shaktiman trucks, Suzuki Gypsy, Mahindra Jeep, Armada - you name any off road vehicle, you will find at least one here. These vechicles come with 98B XXX registration numbers for army. 10 years or later these vechicles will be auctioned as scrap. The dealer will get them to his yard and get an RC book in his name, pay road tax, get insurance etc. Rexy and similar automobile crazy guys will come to this yard and pick one or two vehicles at a price. Later this Jeep or Gypsy will be repaired and repainted with a new life and roll the wheels on road or an estate where 4WD is essential. We started fixing the four wheels so that we can tow the jeep back to Cochin, 700 km. We changed the bearings, lubricated the rolling parts and ensured there is enough air in the tires. Everything seemed fine and relaxing, by evening we retired from the yard unwinding after a night out on NationalHighway. Got recharged and start our journey at 8am on Sunday -at least that is what we planned for next day.

Sunday morning- after a high calorie berakfast, we were all set to start our 700km towing trip. Both old and new jeeps were wed-locked using an A-shaped connecting rod and bolted using U-shaped clamps. The jeep behind our jeep will turn and break as we steer and stop the one in front. Driving is not as easy as driving a single jeep since there will be force to either sides or forward when we take a turn or apply brakes. When we are about to reach Krishnagiri, we found that left front tire is wearing out than normal and the tire surface was abnormally hot. The root cause was not identified so we tried a different configuration for the tires keeping another tire at the left front. While we were changing tires from one side to another, I met Oswin on the road - they were coming back from Trissur to Bangalore. We continued with the new configuration towards Salem. It was found that the new tire is completely worn out in less than 20km! It was clear the tire will not last our next 500+ km. We tried a brand new tire which is expected to run 20000km and tried our luck. It was 10pm and we reached Bhavani, half asleep. The tire was 80% worn out and it would not last another 400km to Cochin from Bhavani. After parking the jeep on the roadside, we slept through the night. Searching for another tire next morning  did not go bad. Tata 207 tire which should be lasting at least 500km was found at Erode. 30hours are over since we started from Chennai and still more than half the distance to go. I got my mobile battery charged from a nearby shop and kept updating Facebook about my trip with pictures. 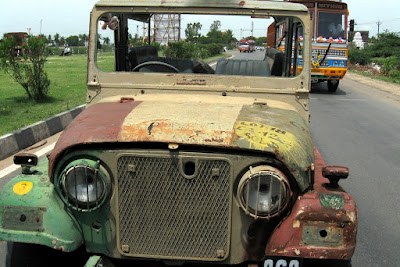 Finally after various diagnosis and trial and error methods, Rexy found that the driving shafts were jammed at the left front side which was a hindrance for the tire to freely rotate at the turns. It was fixed in 5 minutes with a hammer! We lost 24hours and two tires already!! Anyhow, enjoying the slight drizzle and the cool weather, we drove on NH47 towards Coimbatore. By 2am we reached Angamaly where the workshop is just 10km away. I parted my way with the army jeep and took a KSRTC bus to Cherthala and reached home at 4am. No air conditioner but that was the coolest trip I ever did on road. No mobile car charger - but we were fully charged throughout.

I am not sure Rexy is doing the jeep refurbishing now. You can contact him at Kalamassery very close of Cochin University  campus; he has a shop named Twinkle.


Perseverance is the key in this mission-completed in 4 days and costing a few tires!!