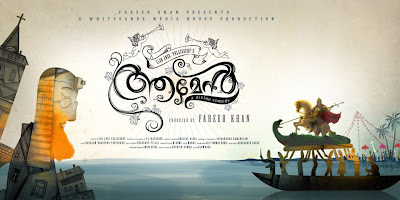 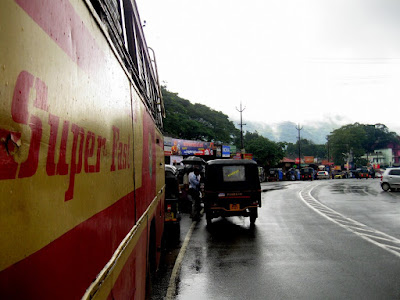 After a three months break to meet life’s expectations, we set out on a Wednesday to the capital city Thiruvananthapuram expecting The South-West monsoon to arrive on time. Our first destination was Kazhakkoottam to visit St. Xavier’s College, Thumba. Staying at Royal Lodge (Near A.J. Hospital, Kazhakkoottam, Tel 9388109963, dbl Rs 400) was the best option. I was in a Jesuit seminary on the same campus where St. Xavier’s is located. Going to the seminary after 20 years with Megha is akin to being at the crossroads of two parallel paths in life. The transport to the coastal area is very limited as it was in 1993. HVK Sir was there to help, his friend Rajanish met us at Kazhakkoottam and dropped right inside the 80acre campus. I gave Megha a tour of the campus which has not changed after 20 years. I met Biju Joy from my batch in 1993 and we talked for a while reflecting on our past life. He gave me the contact details of other three priests at Loyola College whom we met next day. Sijith hosted us for dinner the same night; I was impressed with his techie articles in Mathrubhumi .

The monsoon has not yet arrived and our fears grew about a late or missing monsoon. Going a little south to the coastal area was our next idea, so we visited Kovalam in the evening and the grey clouds looked promising. Catching up with the classmates from CUSAT was next in agenda. Deepak, Kunju, Jishin and Nevin; evocative memories of student life! Jishin did not want me to go looking for a lodge. We stayed with him playing with Mishal and Mia and relishing superb meals. A German movie- Blue Ocean- at Goethe Zentrum next to University of Kerala was indeed a good idea to spend the evening. Though Jishin did not come with us, he gave us a few names to visit in Kanyakumari district – Thottippalam, Thripparippu, Chitharal. These exotic names attracted Nevin and Anu to join us on a day tour with Ian- his 18 month old son.

If you are staying close to TechnoPark, you can take the road to Kovalam- Vizhinjam- Poovar to reach TN border at Marthandam. Though this route is longer, it is worth to avoid the city traffic through Balaramapuram-Neyyattinkara-Parassala. If you are taking a bus, frequent TN buses ply to Nagercoil. From Thampanoor bus station. Get off at Thuckalay to visit Padmanabhapuram Palace which is 15min on foot. Hotel Chitra at Marthandam is a good vegetarian option for a tasty lunch and they run a hotel at Nagercoil.

Padmanabhapuram Palace, 64km from the capital, is in Tamil Nadu but managed by KTDC (04651-250255; admn Rs 35; 9am-1pm/2-4:30pm; Monday holiday). Parking fee is a hefty Rs 50 for parking on the roadside. Asia’s largest wooden palace complex built in 17th century by Iravi Iravi Varma Kulasekhara Perumal consists of 14 different palaces built by the Travancore rulers. King Marthanda Varma dedicated the kingdom to his family deity Padmanabha, an incarnation of Lord Vishnu, hence the name Padmanabhapuram – city of Lord Padmanabha- was known as Southern Travancore. The clock at the clock tower in the palace is 300 year old. Time stands still here! Literally...the clock is dead at 3:25!! Glorious years of princely rulers and their indulgence in luxury are brandished with teak and granite structures decorated with Chinese, Belgian artefacts. Modern civilisation is visible with the presence of squat toilets with septic tanks adjacent to the bedrooms. After 1950s, the palace became part of Madras State (Tamil Nadu).

Mathoor Hanging Bridge aka Thottippalam is a flume (open  aqua duct) connecting two gargantuan mountains across Pahrali river (also called Parazhiyar) for irrigation purpose; erected on 28 concrete pillars measuring up to 115ft height. Walking across this bridge gives you a sweeping view of the mountains and green expanse. 15km away from the Palace, this tourist attraction is easily accessible by road. From Thuckalay or Kulasekaram you can reach the top of the bridge. The road to the bottom of the bridge was in a bad state. Twenty-eight huge pillars shoulder the bridge. The then Chief Minister, K. Kamaraj, ordered construction of the bridge as a drought relief measure and for development of agriculture activities.

Kulasekharam: Named after Iravi Iravi Varma Kulasekhara Perumal, this area is very similar to Kottayam district in Kerala with lots of rubber plantations. Many Keralites migrated to this area for farming. More than one medical college and many churches are present. Thriparappu Waterfalls is a major tourist attraction in this route where crowds come and take a dip; though we did not find it very impressive.

Chitharal Jain Temple: At a tiny village in Kuzhithurai town, Chitaral is accessible via  Arumanai road from Marthandam. At Marthandam, turn left to reach Attoor and then left again. Ask locals for ‘malai kovil' (rock temple) in local parlance, and they speak in Malayalam and Tamil; in a seamless blending of languages and culture. A short hike through the wide cobbled path takes you to the top of the hill at the cave temple entry point. The hill was sacred to the Jaina ascetics of the 5th century A.D. Formed by a cluster of rocks there is a natural cave with a tiny pond at the west. There are several carvings, prominently Mahavira Tirthankara and on the left, Parsvanatha Tirthankara, and to the right.  The transition to a Hindu temple in 13th century is visible by the presence of brahmanical sculptures during Pandya rulers.  A 360 degree view of the surrounding serene landscape with Tamiraparani  river like a silver ankle; breathtaking and leads you into pensive solitude. This ancient monument is protected by maintained by ASI (Archaeological Survey of India).

Late in the night, on our way to Kazhakoottam, rains followed us along the coastal bypass. Schools open the next day, a rain soaked morning. Chasing the monsoon, we headed to the central Kerala and further North.
By romin at June 21, 2013 2 comments: