Hailing from the Western Ghats, I find MOUNTAINS CALLING a befitting expression.

A custom – leaving Bangalore during the week of Deepavali – took us to the unmarred Western Ghats of Kasargod back in 2018. The escapade stayed with us, and after four years, we were back to revel in the winter of the Western Ghats. There are many routes to reach this part of God’s own country. The route to Kasargod and Kannur can be summed as: Meandering through winding, narrow roads in the forest - traverse the inconspicuous borders between the states. Later on, winding through excellent tarmac via small towns and hamlets. 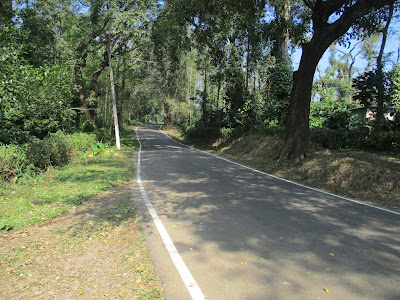 Due to the last moment changes in the booking at our Airbnb, the journey was split into two days. Breaking the journey at (Kukke) Subramanya was mainly to descend the rustic Bisle Ghat. The road after deviating at Channarayapatna is not in the best of condition. Some stretches have patches, whereas others have crater-like potholes. The Bisle Ghat is rugged, making the other two ghats – Charmadi and Shiradi seem tamed. The simple and sumptuous akki rotti lunch at Udupi Veg Family Restaurant, Kudrasthe was an energy booster to descend the curves of Bisle.

The Dwara hotel at Subramanya is fine for a night’s stay. The new hotel next door Hotel Adithya Nest has better amenities for the same price, which unfortunately, we were late to learn. The euphoria of riding through the twists and turns of ghats was pacified by spending the evening by the river. An early dinner brought the exciting day to an end. The route to Palavayal from Subramanya is pristine, untouched by tourists. The only vehicles on this enchanting route are the occasional locals commuting. Green plantations interspersed with forests; these narrow roads sporadically open up to a well-marked wide road. The aura of riding through green plantations interspersed with forest topped with thing layer of fog, cannot be captured by lens. Notwithstanding to lose the inexpressibly lovely ride on these twists the next brief stop was at Sullia to fuel the vehicles and ourselves. Riding on, a quick stop at one of the vantage points overwhelmed me with the vista – ranges of mountains until the eyes could see. The spectacular stretch between Kolichal and Cherupuzha falls under Kasargod part of Malayora Highway. 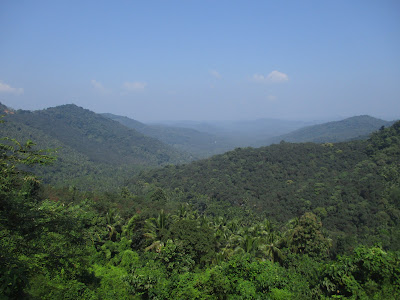 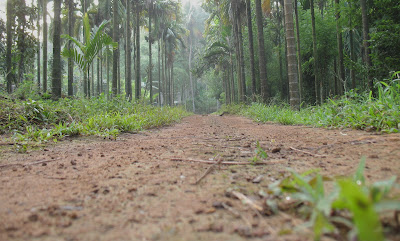 A faint devotional song playing from a temple in the vicinity mingled with the chirping of birds, the cawing of cocks, and the occasional pecking of a woodpecker is how the first day began at the charming Airbnb. Nestled in the middle of an areca-nut plantation, Palavayal Home Stay is next to the pristine Tejaswini River. This well-kept house is pure bliss to spend a few days away from the city. It is green around the property as long as your eyes can see, and a clear blue sky on top. The pleasantly cold mornings with a thin layer of fog and dew drops on the plants and trees gave the first impression of the winter ahead. 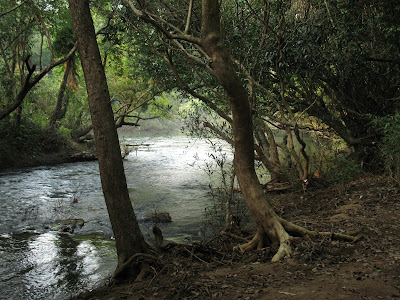 A walk through the plantation leads you to the stream. The path through the plantation reminded me of walks back at my ancestral home. The flowing water hidden behind foliage has strong currents. It is well-known for white water rafting in the monsoon season. The water in the river remains cool throughout the day. Making it perfect to jump in anytime. The calm and quiet on the banks of the river snugged behind the thicket is priceless. The sound of water gushing through stones is accompanied by the chirping of various birds. This makes for a perfect soundtrack (white noise) to help you sleep once back in the city. 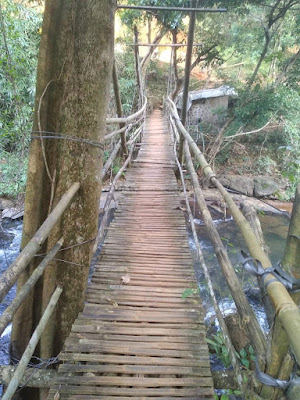 A bridge connecting Palavayal and further to Pulingome with Palavayal Farm Resorts at Enichal, is under construction for over four years. Without the bridge, it is a roundabout of 12 kilometres to reach the town that is otherwise two kilometres away. A temporary (4year old) bamboo footbridge (Enichal Bamboo Bridge)lets pedestrians get across the river. Autorickshaws wait on either side of the bridge to ferry the passengers to the next destination. A temporary fix to make the daily life of locals smooth can be exotic to the outsiders (coming from cities). Having seen many such bridges across north-east India, it was surprising to see one in the most progressive state of Kerala. 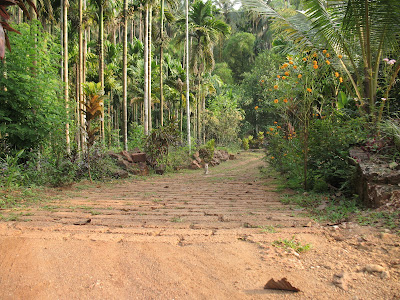 As with all nice things, this trip was coming to an end. Starting on Friday morning, it was time to explore more of Malayora Highway.

On the fantastic tarmac of the Kannur part of Malayora Highway, I was stopped by a police officer just after crossing the town of Payyavoor. The dialogue followed as below: It must be rare for them to see a fully geared motorcycle rider, and they didn’t know it was a lady riding.

PO: Where are you heading?
M: I am going to Bangalore
PO: Where are you coming from?
M: From Palavayal
PO: What were you doing there?
M: I was staying at The Palavayal Home Stay for a week. I was working from there this week.
He was still not convinced and kept asking more about the stay, and I had to explain the concept of work-cation.
PO: So you go alone on this motorcycle everywhere?
M: Yes, I like riding and prefer to ride alone

The police officer was fascinated and appreciated a bunch of times, uttering 'very well'. Most of the conversation happened in Malayalam. He was merrier when he learnt that I am not a Malayali but married to one and have learnt the language. The route was written and kept in the tank bag. The police officer was curious. He was told it is better to ask the locals than to trust and follow (everyone's beloved) Google chechi. He sent me off with a wave and many more 'very good, keep it up!'

Kerala state police are distinguished. They are unlike the conventional police force. It is comfortable to strike a conversation with them. They are well-behaved and treat others with respect.

The State Highway 59 (SH-59), Hill Highway also known as Malayora Highway is proposed to connect the northern most district of Kasargod with the southernmost Thiruvananthapuram passing through 13 of 14 districts in Kerala. Most part of the highway in Kasargod and Kannur districts are complete except a few stretches. The traffic is still not very high through these roads. From Kannur, it will deviate to Wayanad and Malappuram- two branches. Once complete this will be the most exciting route to witness the beauty of Western Ghats in Kerala. 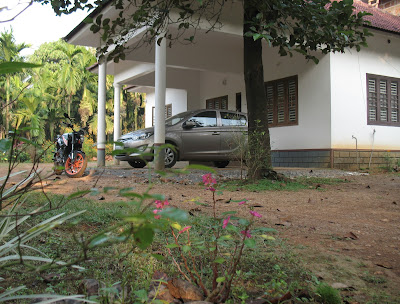 Kancheepuram – Home to finest silk and temples in south India

The sobriquet temple town is apt for Kancheepuram. Look up on the maps, and you will find numerous temples. The other prominent place will be silk saree shops. The temples in the town echo the saga of the history carried on its shoulders. Filtering the temples to visit is a taxing assignment, especially when you don’t bring much time with you. We had one evening and the morning to cover the places. The best way to cover a good number of temples in short time is to hire an autorickshaw. They navigate narrow alleys expertly, and the other modes of transport give way to them out of fear! Hold on tight for the ride. 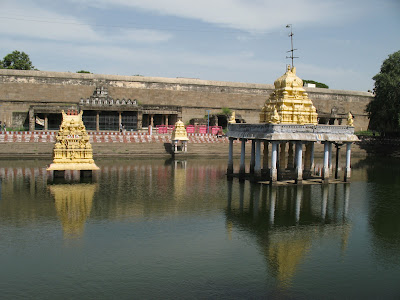 The most famous temple next to Kanchi Kamakshi amma has to be Varadaraja Perumal Temple, also known as Devarajaswami Temple. It is in this temple complex the huge wooden idol of Vishnu is brought up from the temple pond (by draining the water in the pond) every 40 years. The last one was in 2019.  The next spectacle is not until 2059! A modest 5 rupees is charged to carry a camera to the temple complex. It was pitiful how people (with smartphones costing thousands of rupees) haggle for this meager fee. The beautifully carved pillars of the 1000-pillar hall are exquisite, though a mere 96 of the original remain. The stunningly detailed carving of the columns tells you many stories of mythological importance. Built during the reign of Vijayanagar empire, the monument is enormous. 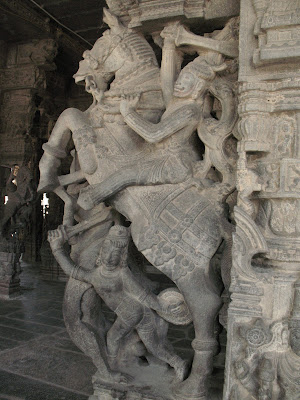 A spectacular marriage hall with numerous carved pillars commemorates the wedding of Vishnu and Lakshmi. According to folklore, this temple is said to cure lizard-related illnesses. Thanks to the legends and tradition, serpentine queues to get a glimpse of silver and gold-plated reptiles are found on one side of the temple complex. This temple is believed to be one of the Divya Desams. Divya Desams are the temples that were visited by Alvars – the poet-saints of south India and located in Vishnu Kanchi - home to many famous Vishnu temples. 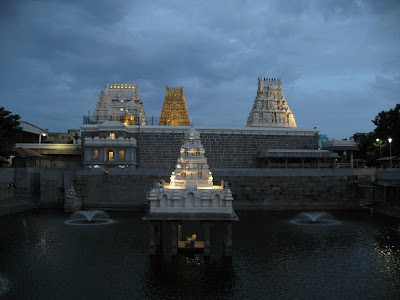 Kamakshi (she whose eyes awaken desire) is the main deity of the imposing Kamakshi Amman Koil. The goddess is also known by the names - Lalita, Shodashi and Maha Tripura Sundari. The temple is dedicated to Parvati in her guise as Kamakshi. The marriage hall boasts ornate pillars, and the main shrine is topped with a golden vimana (legendary flying chariot). Inside the sanctum, the main deity is depicted sitting in the lotus position (Padmasana). The temple is built by Pallava dynasty and Kancheepuram was their capital. The pond behind the temple complex is soothing to be around. It is spectacular to view the temple in the late evening glow, when it is lit up and the lights reflect in the pond. The light evening breeze enhanced the ambience. 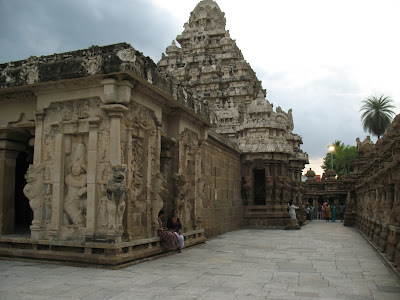 The most impressive and oldest temple in Kancheepuram, with intricate stone carvings – Kailasanathar Temple, is not crowded like the other two temples mentioned above. Built by the Pallava King Rajasimha in the 7th century, this temple is dedicated to Shiva. The largest lingam in town and the third largest in Asia is housed in the sanctum. The sand stone edifice is a treasure trove of ornate carvings. The inner walls in the courtyard are renowned for one of the early and best examples of Hindu mural art in Tamil Nadu. The temple complex has a soothing effect, and the outside area has benches and well-maintained lawn. Important to the regional history, temple walls have numerous inscriptions carved in ancient scripts. 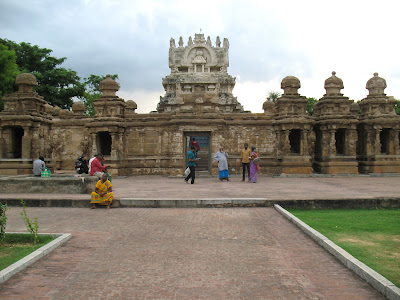 Covering a whopping 12 hectares, Sri Ekambarnathar Temple is the largest temple complex in the town, dominated by the 59-metre-high Gopuram. Sculpted by gifted artisans during the Vijayanagara empire, the carvings are as old as 1509. Of the five elemental temples dedicated to Lord Shiva – this is the shrine of Earth. The name of the temple is said to be derived from the old mango tree housed in the temple complex, with four branches depicting four Vedas. Eka Amra Nathar – Lord of the Mango Tree. Legend says Kamakshi worshipped Shiva in the form of linga (made of sand), which is worshipped in the sanctum even today. 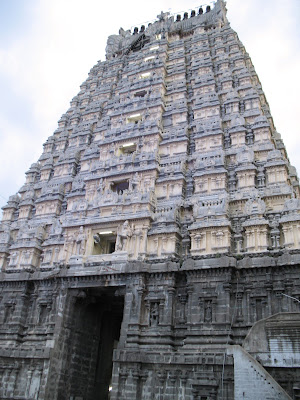 Built shortly after the Kailasanathar temple, another architecturally marvellous Vaikunta Perumal temple is nearly 1200 years old. Representing the architectural evolution of 1000-pillared temples - are the lion-carved pillars in the cloister. The carvings on the walls and pillars are intricate and spell-binding. The friendly priest inside the sanctum offered us prasadam. The temple was peaceful, with no crowd to relish the incredible architecture. The temple is also known as Tiru Parameswara Vinnagaram and is one of the Divya Desams.