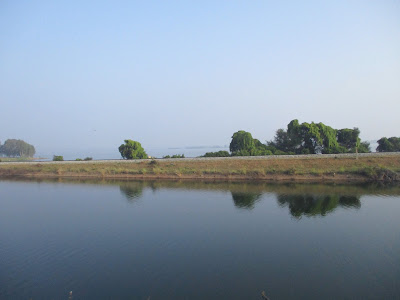 The true beauty of our country is hidden in the interior routes that are not frequented by tourists. You won’t find a fancy restaurant here. But a small joint run by a couple, where they dish up homely food. This way, one is not spoilt for choice with numerous dishes on the menu, which takes ages to decide what to eat. In the southern interior regions of Karnataka, it would be Idli or Dosa. Ditching the four-lane highway leading to Hunsur and eventually Kushalnagar, we turned towards the hinterland of Mysore. Riding along the KRS backwaters watching the stunning Sagarakatte Railway bridge crossing the lifeline river Kaveri passing through hamlets named Hoskote, we breakfasted at Kalenahalli. There are curves at every corner, and a narrow road with no traffic was pure bliss to ride in the early morning fog with scanty sunlight. Reaching Krishnarajanagar, a grand board greets you with the words “Welcome to the land of paddy”. Vast areas covered with paddy fields on either side of the road, ready to be harvested, were glowing golden in the morning sun. Remaining faithful to exploring the interior parts, we rode on minor roads. Deviating again from Konanur, we entered the less frequented routes to reach Shanivarasanthe through coffee plantations and reserve forest. From Shanivarasanthe, the path was straightforward, Kudrasthe – Patla and Bisle Ghat viewpoint.  At Kudrasthe, there is a deviation towards Sakleshpura. The road is patchy, but the views are astounding. Stop at the viewpoint maintained and run by the forest department and enjoy the spectacular vista of the Western Ghats and the gurgling rush of a distant waterfall. 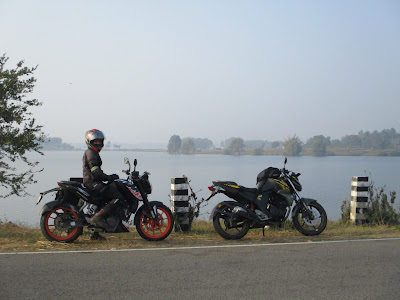 Be amused by the enthralling landscape of the Western Ghats from another vantage point nearby – the unpretentious Patla Betta. The Mallalli waterfalls seem to be gaining popularity, with signposts at several locations, worth exploring if you have time on your side. With a long day ahead and our share of quest for the period fulfilled, we headed back to Mysore with a heavy heart. Choosing a different route, we steered towards Somwarpet. Narrow winding roads through nondescript villages with a steep uphill at some parts, we made it to the outskirts of Somwarpet. Gliding on the smooth curvy roads, we stopped for a late lunch at Kushalnagar. The golden temple is not open to visitors, owing to the safety of the settlement. The last leg of the journey from Hunsur was tiresome, with the roadway filled with crater-like potholes. At length, after cursing the transport department and the bothersome local dunderheads on the road, we made it to our Airbnb in Mysore exhausted.