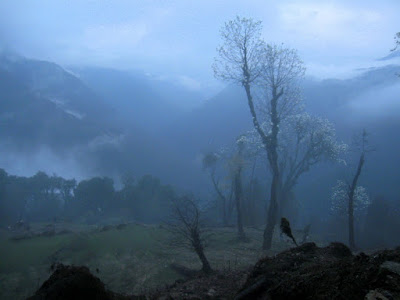 Two is a company and three is a crowd - that is what I was thinking when I discussed with Sharath about travelling to Sikkim in a group. Many aspirants dropped out after reading a detailed account about frugal backpacking trip which required good fitness, preparation and a mindset to live with basic creature-comforts. It was six of us - Romit & Divya , Sharath & Asha, Megha & I - who were on a Friday night train from Bangalore to New Jalpaigudi. We celebrated Sharath & Asha duo's first wedding anniversary with a cake and candle. Obattu prepared by Megha's mom deserves special mention in our culinary delights, apart from the dinner bought by Srini and roti/rasagolas at Malda. After 2D/2N in the train with food-sleep-talk-leg pulling -games cycles, we stayed overnight at NJP at Hotel Sahara( NJP Station Road, d Rs 550).There are many hotels on this road which is 10min walk from the station, while cycle rikshaws will surround you to get a commission by taking you to a hotel of their choice.

On Monday morning, we were welcomed by a travel agent with his Jeep for an unbelievable Rs 1200 for a group of six. Later, the cross-selling agent was offering us package tours in Sikkim. Leaving him behind, we headed to Siliguri (shared auto Rs 15) and boarded a comfortable bus (Rs 100, 6 hours, Tenzing Norgay bus station) to Gangtok. Enjoying the scenic drive across Teesta river and a few hydro-electric projects , we reached Gangtok by 2pm after a lunch break. Watching daily life in Gangtok, we had to walk for an hour to find a nice and cheap accommodation at Hotel Highland(31ANHWay, d Rs 600). Closed to vehicle traffic, MG Marg at Gangtok reminded me of the Champs Elysee in Paris as it looked like a florist's shop rather than a busy road in India. Strolling along MG Marg, we checked out different options for a 5-day for Kanchenjunga trek at Yuksom-Dzongri trail. Altitude Tours & Travels (Tourism Bldg, MG Road, 9832370501; www.trekkinginsikkim.com) is a good pick- Rs 1400/person/day for a 5 day trek. This fare includes your porters, yaks/mules, food, accommodation at trekkers-hut (sleeping bags/mats) and two nights stay at Yuksom. There are many tour agents along MG Road, use your bargaining skills before you sign-up. Chilling out at Tangerine(Gound fl, Chumbi Residency, Tibet Rd; beer Rs 80) at the Japanese-style floor-cushioned bar was the best way to unwind sipping Dansberg Blue beer.


Tuesday, after handing over the documents- ID proof, two passport size photographs, we were ready to take a shared jeep (Rs 150, 6hours) to Yuksom around noon. The best possible capacity of these long-chassis Mahindra jeep is 11 (3-4-4) and if they squeeze in one more person, it is tad tiring for this six-hour trip. Charming route will not get you bored - iron bridges, construction sites, frothy white rivers, lovely people and village life. We checked in at Hotel Demazong (d Rs 500) where backpackers pile up and if you are lucky, you will get one of the three bedrooms with private bathroom. Dined at Gupta restaurant, serves almost any cuisine in the world. We met our guide Deepak at the hotel and other potter buddies were ready at 8am. Enjoying the fresh air of Yuksom, we compacted our luggage to 50% - to make the mules' life easier- leaving three backpacks at the hotel reception and carrying the essentials in our daypacks. You can leave anything that needs electricity as there is no power at the trekker's hut. You can arrange your permits from Yuksom but may have to wait for a day to sort out the paper work.


Yuksom at an elevation of 1780m(5840feet) is the starting point of Sikkim's most rigorous trek to Goecha La at 4940m(16200ft) and this whole trek will require 7 to 10 days depending on various factors- weather, acclimatization etc. Acute Mountain Sickness (AMS) will hit once you go above 3000m(9800ft) and the fastest will be the first one to get by AMS. Headache, lethargy, dizziness are mild symptoms, which may develop more severe and can be fatal. You can treat mild symptoms by staying at the height you reached for a day or two and popping up a paracetamol will help to alleviate headache. If condition aggravates, descending to a altitude of 500m less is required and if that doesn't help, hospitalization is essential. Hydrate yourself drinking plenty of fluids and water. Do NOT drink alcohol. Carry thermals, fleece jacket, Down feather jacket, thick trekking shoes, woolen socks, Down gloves, skullcap with you to be warm in the high altitude. 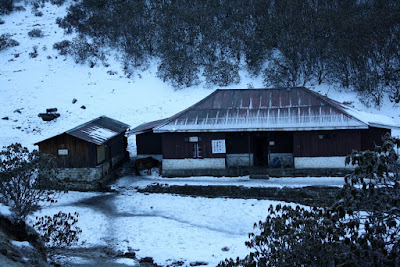 On day one, hiking through Rathong Valley past a village school, check post and a few traditional village homes, the ascent is gradual and enthralling through the unspoilt forests and a few hanging bridges. A few stretches in this phase were blood pumping and we were not able to catch up with the yaks and mules who were moving at a constant pace. A few fellow trekkers, European travelers passed us after a few hours. We stopped at a trekkers'-hut for lunch and it was more than a basic lunch at the mountain ridges. Crossing a few hair-rising hanging iron bridges, damp and wet rocky trails, thunderous water falls (many heard but not seen) this hike demanded more cardio-vascular fitness. Sunlight was scanty through this green forest and thick fog was hiding the trail. At Bakhim, while stopping for a tea-break, we met with Praveen Sharma and his family with a wonderful mountain dog -Scooby. After catching up with Sharath and Romit couples, we strolled up the next 300meters, watching mist-soaked magnolia flowers. Taking a few short-cuts reduced the distance but increased the heart rate to three digits. After using most of the body muscles and those below torso in particular, Nike Run Club stretching sessions helped us to rejuvenate the sore muscles.


Reaching the rustic hamlet of Tsokha after nine hours was a big sense of achievement. Sipping hot tea and munching biscuits, we were chatting about our enthralling experience hiding our tired and cold feet in the sleeping bags- all six of us in a single room at the basic trekkers' hut with no electricity. There were another two dozen hikers and potters thronging various huts and staying in the tents pitched outside. After a sumptuous dinner, we did not miss the chance to try tongba- in a girded wooden tub of fermented millet seeds onto which we poured boiling water and sip the resultant liquid using a bamboo straw. 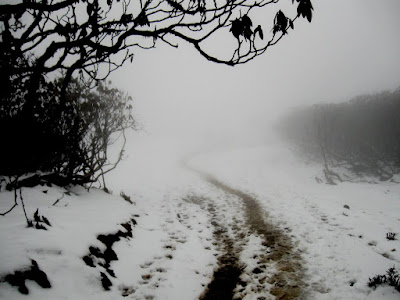 Ideally we should have spent two nights at Tsokha for acclimatization before ascending to Dzongri 4025m(13200ft). We started the next day morning at 8am to Dzongri and the trail was quite difficult as this was at the altitude of more than 10000ft and breathing becomes more tiring. After a few hours, we were excited to see the snow patches on the way and two hours later, there was just snow everywhere. Trekking through 18inch thick snow was enthralling amidst the snow fall, keeping an umbrella helped not to get wet. Keeping a good pair of footwear -running shoes or sneakers don’t help in this trail; invest in a proper trekking shoe- will help you from falling on the snow. Skating through the downhill stretch was real fun. As we were late to reach Dzongri for lunch, at around 2pm our potter friend carried a kettle with piping hot tea and that was a big relief for all of us. We reached the meadows of Dzongri and collapsed and cuddled up on the floor of the trekkers' hut main hall as the hut got booked-out and we could not get a room. A slight headache was affecting all of us and staying at Dzongri one more day was ruled out as two of us were pretty sick of the high altitude and bitter cold. 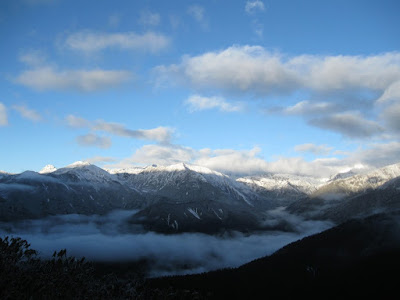 Though the night time mercury reading was -3 degree Celsius, getting up at 5am next day morning, 3 of us climbed up a nearby hill to catch a glimpse of magnificent Kanchenjunga ranges. Going to Samiti Lake 4200m or Goecha La 4940m was not possible in 5 days and as this was our first high altitude trek, we did not want to go higher. Washing face in the water formed by melting ice at 13200ft - I can't express that in words! After breakfast, we decided to descend to Tsokha- the return is the same route, though the weather was not permitting a speedy descent- rains, muddy rocks and slush. We reached Tsokha by evening and rested there for a day chatting with Victoria- an English traveler from Germany. Romit and Sharath tried their hands on laundry and the radio was playing English songs and a faint live commentary of Cricket World Cup. Next day, trekking down to Yuksom was more than pleasant.

On the way back, saying the slogan 'If you are not trekking on the edge, you are using too much space on the trail', I was stepping on the stones at the edge of the trail. One of them just fell off and two seconds later, I was hanging onto a bush like in the movie Cliff Hanger. Megha looked back and did not see me on the trail and she found me hanging in the air. I saved my water bottle first and then calmed down Megha and myself. Slowly I could climb up, thanks to the strong roots of the bush. Hereafter I was using the extreme left side of the trail instead of the edges. We reached Yuksom by evening and checked into the hotel after our successful 5 day trek to Dzongri in the Kanchenjunga ranges- many first time experiences in this eventful trek. 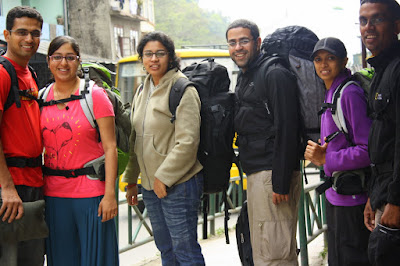 Your attitude decides the altitude you reach!