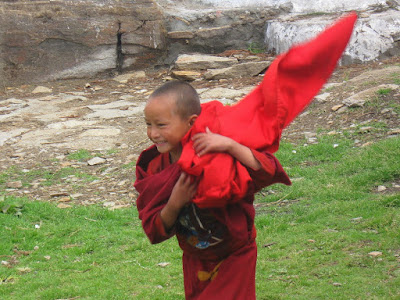 Yuksom is spelled differently across the signboards- Yaksum, Yuksam, Yoksum are just a few of them - all of them mean the same - 'meeting place of the three lamas', the first chogyal of Sikkim was crowned here by the three lamas in 1641 at Yuksom. Though the Kanchenjunga trekking's main trailhead starts here, this village is still sleepy and not overcrowded by development and tourists. There are very limited options for accommodation or food. Hotel Pradhan( 99330-19979; 97330-92407; d Rs 500) provides home-cooked food if you book in advance and Mr. B.P Pradhan is very friendly though loud. Other options are Hotel Demazong (d Rs 500) where most of the rooms do not have private bathrooms. Hotel Tashi Gang (03595-241202; dRs 1100) resembles a monastery, the best in this tiny village. There are two basic restaurants with friendly staff who serves most of the Indian and continental cuisine (mains Rs 50-100). Ask for HIT beer distilled at Yuksom Breweries, owned by the famous Bollywood actor Danny Denzongpa hailing from Yuksom known for villain roles in Hindi movies.


After finishing our 5 day trek to Dzongri, we were welcomed by the news of a 2-day 'bandh' (general strike) in the state of Sikkim. Not planning to stay further, none of us was carrying enough cash to survive next two days at Yuksom. That night, we arranged a vehicle to go to the nearest town -Pelling- where the nearest ATM is located. Luckily our four hour round trip was not eventful and we were successful in withdrawing enough cash. After extended sleeping hours and laundry work, we decided to visit the photogenic monasteries and trek through the village's sub-hamlets. While riding with Mr Praveen Sharma looking for a poultry farm, local politician stopped our car and threatened us mildly so that we don't drive the next two 'bandh' days. Gupta restaurant guys were giving us food and let us enter through the backdoors. 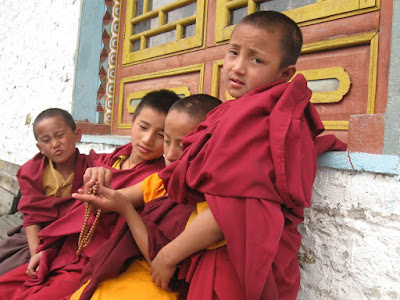 Dubdi Gompa is the most photogenic monastery at Yuksom, the oldest monastery of Sikkim established in 1701. The steep 1 hour climb is very steep and carry enough water and glucose with you before you start at the trail near the village clinic past the police station. Another photographer's attraction is relatively new Kathok Wodsallin Gompa near Hotel Tashi Gang and this is easy to reach. Inside, you will find a big statue and many paintings of eight manifestations of Padmasambhava (lotus -born) aka Guru Rinpoche or 'second Buddha'. Splendid Nagdhak Changchub Choling, entered through an ornated gate opposite Hotel Yangri Gang is equally photogenic, but beware of the furious guard dogs.

Tranquil Kathok Lake on the trail to Dzongri, near the village school will take your breath away, if visited in the early morning. From here the anointing water was taken for the coronation of the first chogyal of Sikkim in 1641 by the three lamas. The coronation throne is protected at the ASI site Norbugang Park, housing a prayer house, a few scenic cryptomeria pine trees, a huge prayer wheel and a footprint left by one of the three lamas. You will find many foreign Buddhists visiting these places for religious reasons than tourism. On the second day, we visited the local post office and sent post cards. Romit and Divya reserved a jeep to drop them to Jorethang to board their flight frm NJP at 3pm.

Later in the evening, we bumped at Victoria and two other trekking enthusiasts - Anna and Nicholas. Megha and I got excited about their plan to trek from Yuksom to Khecheopalri (pronounced 'catch-a-perry'), a highly revered holy lake, 10km by trekking trail and 30min by road. We signed up for this 6hour trek with the help of two local potter guys. Praveen offered help by transporting our backpacks to Khecheopalri lake as Praveen's wife and son also joined us in this rigorous trek and Sharath and Asha occuppied their seats in the Tata Safari.


We kicked off at 8am in the morning bidding adieu to Yuksom, led by Victoria the group ascended lofty mountains and descended to deep valleys trudging along the villages, scenic streams and hanging bridges. A friendly dog wagging his tail , followed us who shared biscuits and chocolates at our frequent pit stops. This was a heavily blood pumping trek and required good cardiovascular fitness, but worth every step of the trek through the forests. By 2pm, we reached Khecheopalri lake and visited the tranquil premises of the lake, the prayer wheels lining up the jetty, the prayer flags fluttering in the wind. After having lunch at the small shop near the parking lot, we booked a jeep, Rs 2000 to Pelling. As the shared jeeps leave at 6am in the morning, the only other option was staying overnight at the basic lodge near the parking lot.

Saying good bye to Victoria and friends who headed to a home stay, we reached Pelling after two hours and checked in at Hotel Simvo (03595-258347, d Rs 500-1200). Bargain for a room on the upper floors to catch an early morning view of Kanchenjunga, though the lower rooms are cheaper. There are many other hotels along the two kilometer stretch of Pelling as many Indian tourists throng here for a dawn view of Kanchenjunga and this small touristy town is well connected by bus and taxi. Be prepared to pay upto 50% more than the M.R.P ( Max. Retail Price) for packaged foods and supplies. Book your bus tickets at SNT Counter at Hotel Pelling (Rs 100, 5 hours) and you will be picked near the roundabout in front of Hotel Garuda. Replenish your cash valet at the SBI ATM if you are heading to Yuksom or any smaller villages. Visit any restaurants along the road to Lower Pelling but beer is scarcely available in the restaurants. You can head to Darpa village taking a day trek and stay in one of the homestays if you are averse to the tourist crowds. 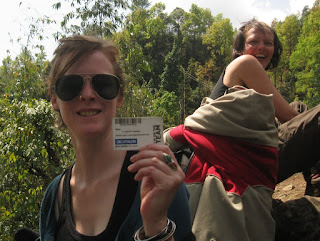 After watching panoramic views from the helipad, walking 25min from Upper Pelling's roundabout, we reached Sikkim's second oldest Nyingmapa gompa- Sangachoeling Gompa. Set on top of a ridge overlooking the valleys, this gompa houses a monastic school and magnificent murals. We joined the junior monks in their games during their lunch break and reflected about living on the edge, sitting on the edge of the ridges. After lunch, we headed to Pemayangtse Gompa- the oldest gompa in Sikkim-30 min walk from Upper Pelling. Overlooking Rabdentse ruins- royal capital of Sikkim from 1670 to 1814, this gompa boasts of a huge prayer wheel, colorful interiors, many murals and statues. 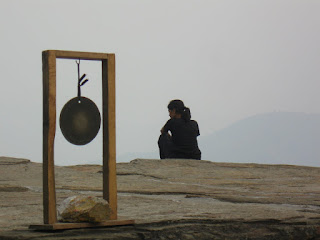 Next day, the SNT bus left at 7:30am and we reached Siliguri by 1pm. We headed to Nepal border and had lunch at Kakkarbhitta crossing the no-formalities border gate. On the way back to India(!), I met with a friend Liju, who is working as a constable in the all-women para-military border force SSB (Sashatra Seema Bal). We boarded the train to Kolkata at 9pm and spent the next two days tolerating the scorching summers of Kolkata. Victoria Memorial which depicts British(?) India's history and culture in a different perspective, iconic Howra bridge- a few among the local attractions we could run through. We used the metro, tram, taxi and bus in this erstwhile capital of India with architectural tributes of the past colonial glory. Unwinding the last night of our trip at a disc at The Park hotel, enjoyed the late night life of the city of Rasagolas. Reaching Bangalore on Sunday night did not make us think Bangalore is any cooler, blame the Global Warming. Not exceeding our budget, the total cost of the 16 days trip to Sikkim was Rs 1000 per hed per day including the train and return flight tickets. A priceless trip with memories of many first time experiences!!!

No one realizes how beautiful it is to travel until he comes home and rests his head on his old, familiar pillow.  ~Lin Yutang
By romin at April 30, 2011