When is the best time for a motor cycle ride? "Monsoon"
Where is the best place to ride to ? "Western Ghats"

There are many who think along the same lines. Oswin was one of them and when I discussed about a monsoon ride to Chikmagalur, he was all game. He was inspired by the photos from our Kalasa ride. Staying at a hostel would be a new experience for both of us. The last time I slept on a bunk bed was during the college days. Zostel is an excellent choice for real travellers Rs 500 for a bed in mixed dormitory. Mostly young crowd, so not recommended for families with tiny tots. 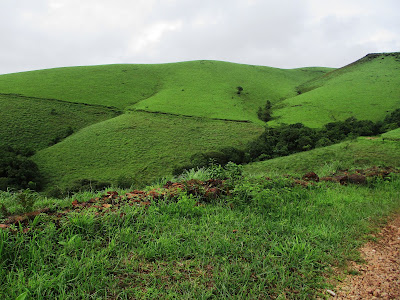 Starting at 6.30am from NICE toll at ECity, we were going past many hordes of bullet groups and orange groups on a fine overcast Saturday morning. Western Ghats welcome you with its glory after Hassan and you feel like making many stops to enjoy the breath-taking landscapes. After breakfast, refuelling and photo-stops, we reached Zostel at 11.30am. 8km away from town, it is on Agumbe road just 500m from The Serai on the right side of the road. 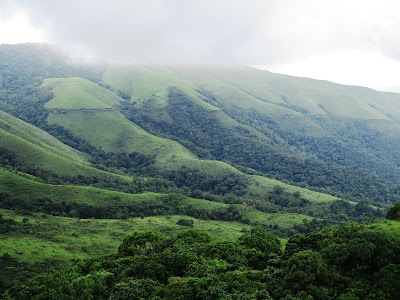 We resumed our ride towards Lingadahalli, after offloading a bit of our luggage. We took a left turn at Kaimara towards Baba Budangiri Road. After paying the entry fee Rs 10, we enjoyed the surprises at each corner. We skipped the turn towards Mullayanagiri because there was not enough time.

The vivid colour of rolling hills, the bluish hue of rain clouds, the deep red soil - the sights at every turn is mesmerising. We couldn't help it, but stop many a times to soak in the beauty around. Roads are in excellent condition and that takes the pain off dealing with potholes. The best part was the road leading up to Baba Budangiri Peak or Manikyadhara waterfalls. "This is better than Scotland" was Oswin's comment. No offense meant, I know Scotland is far more beautiful, just a respite for less immortals who can't afford a vacation in Scotland. 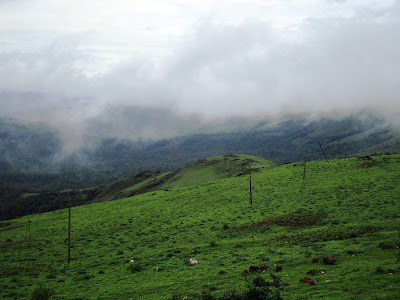 We continued our ride after a stop at Hotel Sharanam at Mahal.  The owner lady was happy to see me again after 5months since my last ride in Feb 2018. Black tea and hot omelettes energized us.


"The forest guards stopped us. They won't let anyone go through the forest route to Kemmangundi" - The couple on a motorcycle told us on our way to Kemmangundi from Mahal.

"What did they say?"


The major goal of riding to Chikmagalur was to ride through the 13km forest route inside Bhadra WLS from Mahal to Kemmangundi. I was a bit sceptical if the guards will let us ride as it was already 3:45pm. 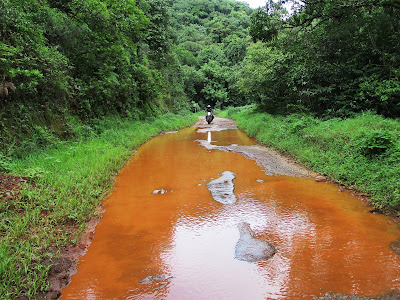 At the check post, the guards asked us our details and warned us about the knee-deep streams to cross. It could be the local parlance or our confidence, they let us go further. 7th time I was riding through this route since 2008 and I still want do it again. The enchanting beauty of green hills and thick forest with rivulets are calling me again and again.


We took almost 40min to cross the 13km treacherous route filled with potholes and deep streams. Crossing many streams without getting stuck was pure luck and skill. But it was worth the effort.  We didn't ride back through the same route, instead we continued to Lingadahalli and rode back to Chikmagalur town in the evening.


After dinner at Siri Café and a hot shower, we crashed at the hostel bunk beds and slept like babies. 430km and almost 14hrs.

Next day, we headed towards Agumbe, but didn't go until there. Instead we took a turn at Balehonnur and continued to Magundi-Balur-Kottigehara-Mudigere-Sakleshpura. On these roads, the lush dark green forest was really cool. We stopped at Malnad Café at Mudigere for lunch; akki roti at this place is delicious. 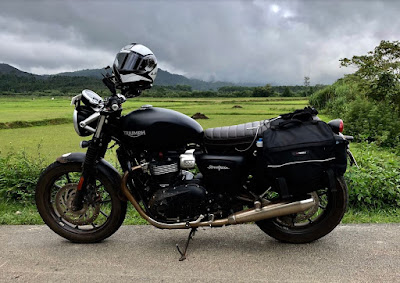 Reached Hassan around 2pm and the ride to Bangalore was smooth until Nelamangala junction on Tumkur road. The traffic was at a standstill here. I took a long 20min break to cool down myself and overheated 200cc engine.


A handful of accommodation options in Chikmagalur: 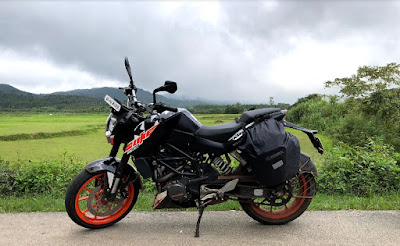