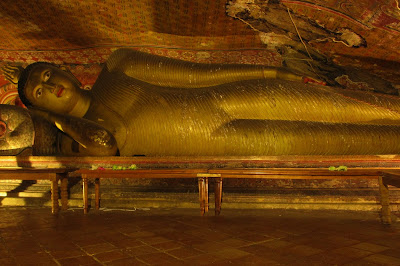 Cave Temples of Dambulla are very popular and prominent in most of the tourist pamphlets. Buses from Anuradhapura to Kandy go through Dambulla (LKR 200, 1.5hrs), get down at the Golden Temple. If you get down in the town, there is a bus station from where you can take a bus to Golden Temple on Kandy Road. Ticket office is halfway through the steps on the other side. After buying tickets (1500LKR per person) start climbing stairs again towards the Cave Temples. Of the five caves, first two are very large.

The first cave contains a statue of Vishnu and around the wall is the depiction of seated Buddha.  Second cave is the most impressive of them. It contains statue of the Kings, after whom the cave is named. A vessel inside the cave collects water that drips constantly from the rocks and is used for sacred rituals. The roof of the caves are covered with mural paintings that depict scenes from Buddha's life. Third cave contains a charming reclining Buddha. Buddha in the fourth cave is seated in a meditative pose, the small dagoba is believed to have been broken by the thieves, who were under the impression that it contained jewellery. The last cave has statues of Hindu deities and Vishnu along with a reclining Buddha. 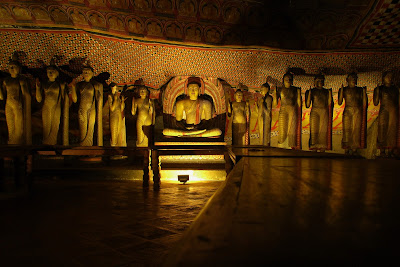 It was here that we met a German speaking Sinhala guide. He learned German at the Goethe Institut in Colombo. It was interesting to speak to him in German. The Germans who were with him seemed fascinated to hear two non-Germans conversing fluently in German.  The return bus to Anuradhapura (LKR 110, 2hrs) took a different route going through many villages with frequent stops.

From the New Bus Station in Anuradhapura you can get a bus to go to Mihintale (LKR 30, 45min). Make sure you get down at town next to the petrol pump.  Our bus dropped us at the University of Mihintale and we had to walk almost 2km and reached the ruined hospital where we met a bunch of guys from Hong Kong who seemed to be lost in the ruins. We explored the ruined hospital with them and went separate ways after they decided to visit the museum. There is a huge set of stairs to reach the ticket office, the other entrance by old road on west is easier and avoids the staircase. 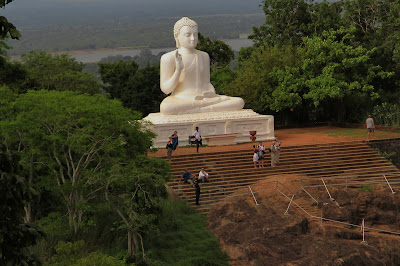 Near the ticket office is the Refectory and one story above are the stone inscriptions of Mihintale. Ambasthale Dagoba is where the King and Buddhist monk Mahinda met, which is believed to be the beginning of Buddhism in Sri Lanka. Mahaseya Dagoba is the largest stupa in Mihintale. The steps to reach Dagoba are carved in rock. At the foot of the dagoba is a small temple which has reclining Buddha and technicolor modern frescoes. Aradhana Gala - the meditation rock is reached by a steep climb on the rock. You need to face precarious rocks and strong winds but a spectacular view of greenery around.
By tatkalticket at September 19, 2017