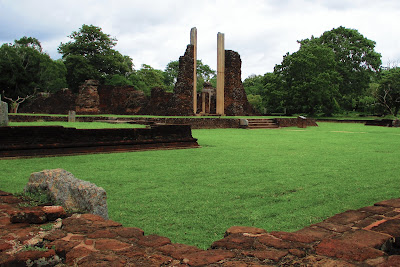 After sipping the delicious tender coconut and munching on snacks, we headed to the Fort Railway Station to board our train to Anuradhapura (2nd Class, 450 LKR). Alternatively you can take a bus from CBT, which runs hourly. Train was similar to Indian trains contrarily very clean, comfortable seats, with plenty of leg space and individual food tray. Many locals use train to commute. Friendly station security showed us to our seats. Train Ticket Examiner will promptly check your tickets. Train was delayed by an hour due to mechanical problem and reached Anuradhapura by 4.40 p.m.

Lakeside Tourist Guest House (dbl non AC 2000 LKR) was a 2 km walk from the station, Sharath - a local gentleman stopped by to guide us.  Popular landmark in the area is provincial council building or the walkers bakery. Both are very close to the old bus station.  Manager Ranatunga is a cheerful and helpful person, who speaks English. Tenny and Seba were two friendly dogs, Tenny being upset as the owner had left to Australia a day ago.  The rooms are clean and tidy, with small shared balcony overlooking Nuwara Wewa.  Opposite to provincial council building, Walker's bakery and restaurant was our food source during our stay here. They dished up delicious Sri Lankan meals and occassionally pasta. 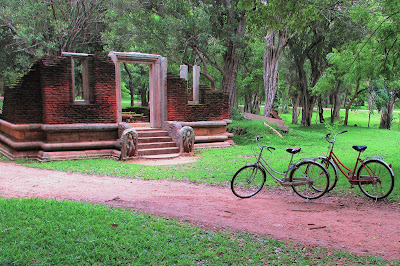 Bicycle is a must to cover the vast area of ancient city. Most of the guest houses rent bicycle, starting at 350 LKR a day. Entry ticket costs $25 for foreigners and half the price $12.5 for SAARC countries. You will have to produce your passport at the ticket counter. Some of the main and popular attractions are Archeological Museum - Ticket counter is at the museum and gives a good background information about the ancient city. Shri Maha Bodhi - The sacred fig tree has grown from a cutting that was brought from Bodhgaya (in India) by princess Sanghamitra (who introduced Buddha's teaching in Sri Lanka). On Sundays and poya (full-moon) days, expect large crowds.

Abhayagiri Dagoba - (Dagoba is the Buddhist stupa, a mound like structure with relics, used by monks for meditation) . This massive  Dagoba is a treat to the eyes, the engineering skill of the people back in 1st and 2nd century BC leaves you stupified. Jetavanarama Dagoba - was as big as Abhayagiri when built and it was the third tallest monument in the world next to pyramids in Egypt. Unfortunately it couldn't retain the tallness all these years. It is very easy to get confused between Abhayagiri and Jetavanarama Dagoba. Thuparama Dagoba - oldest in Sri Lanka, was constructed around 3rd Century BC. 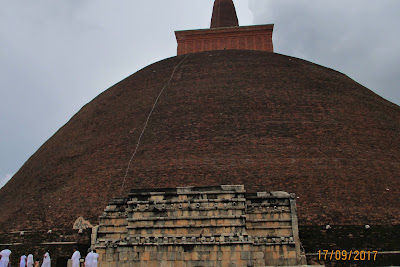 Samadhi Buddha is a fine statue of Buddha in the state of meditative consciousness. Ratnaprasada houses the finest Guardstones in Anuradhapura. Other places include Kuttam Pokuna (twin ponds), Elephant pond - not many tourists come to this pond but go to the twin ponds. Near twin pond we saw a lady selling Beli Mal Bomu - Beli is Sinhalese for Bael fruit and Mal is the flower. The fruit is said to be indigenous to Lanka with plenty of nutrients. It is known to cool the body from inside. Sun dried Bael flowers are brewed in boiling water. Jaggery enhances the taste of this drink.


Elephant pond is situated in the middle of woods and a nice place to relax and take a break from cycling around. The spell of rain had made the pond look fresh and full of life. You can spend some time exploring around. Uttara Moola nearby the Elephant pond has lot of ruins of the monastery and again not many come this side. You get to see the greenery and if lucky you will spot a peacock or a monitor lizard too! Vast expanse of ruins garnered moss and spread out to the jungles behind is riveting. 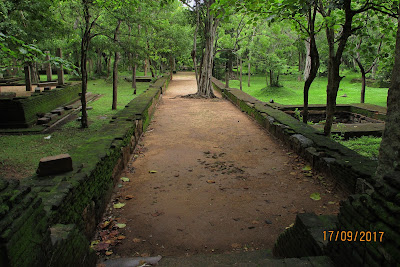 A short spell of rain brought the temperatures down and the green hue of the surroundings was enhanced. We stopped by a small shack to enjoy black tea and coconut roti, while waiting for the rain to abate.  Isrumuniya Vihara has a separate entry fee for the rock temple. It has a small museum which has the collection of some nice carvings. From the top you get a good view of the city and the Tissa Wewa behind.
By Megha at September 17, 2017