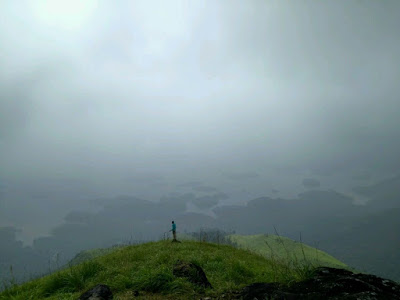 "It is not the mountain we conquer but ourselves" - Edmund Hillary
Hoping to conquer ourselves after a gap of three years , we set out to Wayanad. This time we had a joyous company of Gokul. Pakshipatalam was the destination but the trek is cancelled indefinitely (Contact Begur Forest Office at Mananthavady for more details). Hence we decided to trek the Banasura hill. Thirunelly temple was another place of interest for us.

Ancient Thirunelly Temple is around 30km from Mananthavady (Rs 27, 1hr). This temple is inside the Tholpetty forest range. A short walk from the temple premises will take you to Papanasini river. Panchatheertham Tourist Home will offer basic rooms for Rs 300 (Tel: 04935 210201/ 04935-210055). There are many other options around - Ambika Tourist Home (Tel: 9747 916355/9495280427). Brahmagiri trek also starts from Thirunelly.  Check the status with Forest Office in advance as there is news that trekking is cancelled due to wildlife. 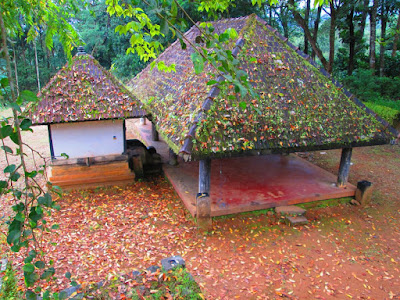 While waiting for Gokul, we enjoyed testing our glucose and cholesterol at the bus stand - a small kiosk run by the Govt of Kerala to monitor the health of God's Own People.

As we didn’t get a direct bus to the temple, we boarded the one towards Kutta and got down at the junction where the road deviates to Thirunelly temple . Crunchy and juicy Kuttettan's Unniappam welcomed us and kept us occupied until we got bus to the temple. There was a long queue of people near the temple waiting to meet a herbal medicine practitioner. We walked barefoot around the ancient temple taking-in the divine atmosphere and then walked to Papanasini. This temple is not so commercialized and still offers a serene atmosphere.  Gokul forgot his kaalankuda (single fold crook-handle umbrella) at many locations which gave us ample time for photos. 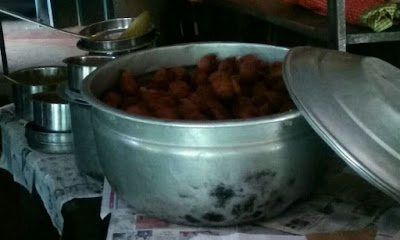 Evening was free and after a not so nice experience of watching movie in Wayanad, I was hesitant to give it a third try. Convincing me took a while and we opted to watch Pulimurugan (Malayalam movie starring Mohan Lal).  It was an entertaining movie but it was the experience which was incredible.  Starting from waiting in the ladies queue for the tickets - which is possible only in Kerala I am sure - to the non stop whistling ( by me of course ) during the movie, I was totally immersed in the world of cinema.


Banasura hills are around the Bansasura Sagar Dam - constructed in 1979 across a tributary of Kabini river. Known as the largest earth dam in India, this dam recently made news as the first Solar project atop a hydel dam.  Legend says that the Asura king - Banasura, (the son of King Mahabali)undertook a severe penance on the top of these hills and thus it was named after him. 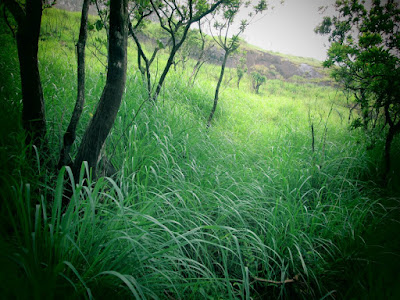 There are many hills around which are worth hiking up for a bird's eye view of the dam and the green mountains soaked in the morning mist. Easiest is to hike to Kattukunnu which would not take more than 90min of ascent. Another trail of 3hrs hike will take you to an altitude of 6800ft if you are blessed by good weather and wild animals - elephants, wild boars and gaurs (Bos gaurus) roam around in this area.


You can reach Kappikkalam to obtain your permits and start your trek. Padinjarethara is the nearest town and Kappikkalam is easily accessible by an auto-rickshaw (Rs 50) You can take a KSRTC bus starting at 7 a.m. from Mananthavady which loops  Mananthavady- Padinjarethara-Banasura-Panthipoyil-Vellamunda-Tharuvana-Mananthavady.

Trekking fee needs to be paid at Vana Samrakshana Samithi office of Varampetta, near Kappikkalam - depending on the duration of the treks starting at Rs 750 for 3hrs for a group of five and the guide's charge is extra. At 8.30 a.m, we started walking at a good pace and reached the peak by 9:45am, despite Gokul's selfie-stops with his new Decathlon shoes. Watch out for leeches in the first phase going through a dense forest with many damp areas. At the peak, while we were soaking in the greenery around, we chatted about early migration to Malabar, global warming, real estate and education. After having packed breakfast (puttu/kadala)  we returned to the VSS office by 11:30am.

On our way back we made a stop at the Meenmutty Waterfalls and the swim in the pool was revitalizing. This is not the big Meenmutty falls, but a smaller one near Banasura Dam. 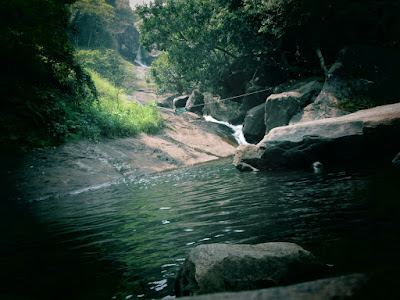 We walked back to Kappikkalam bus-stop but there was no bus showing up for a while. We got a free ride by a truck (TATA 1016) and the driver was happy to take us until Padinjarethara.  After a quick lunch, we visited Gokul's friend's family at Tharuvana. While relishing a delicious snack called Pathal and black coffee, 82year old grandmother fondly called Achamma (father's mother) had many stories to share about her childhood which gave us a glimpse of past lifestyle and education at Malabar. She never went to school but she was taught by a visiting teacher to read/write/arithmetic writing on palm leaf using 'naarayam' (stylus). Achamma was the first native person we met in Malabar; where most of the locals are second generation migrants from Kottayam.

We walked back to the CITY through the fields and enjoying the evening sun. Later in the evening we returned to Mananthavady riding another KSRTC bus for a good night's sleep and Gokul returned to Vadakara for his journey to Alleppey.  Next morning, we returned bus-hoping to Bangalore via  Kutta-Ponnampet-Gonikoppal-Hunsur-Mysore. Stopping at Kuttettan's was highly tempting!

How to reach:  An overnight KSRTC bus from Bangalore to Mananthavady costs Rs 390 (Non AC- Rajahamsa Executive) If you have lot of time, you could take a bus from Mysore via HD Kote-Bavali during the day. Better roads to drive is via Mysore-Hunsur-Gonikoppal-Ponnampet- Kutta-Tholpetty.

Where to stay: Kabani Tourist Home at VC Road Mananthavady (Rs 400 dbl) is easily accessible and one of the cheapies. Hot water and clean toilets, but carry some extra bedsheet.

Going Around: Plenty of KSRTC and private buses from Mananthavady bus station to any direction in Wayanad. There is a direct day bus at 10:30am to Bangalore - a favorite of the students.
By Megha at October 25, 2016